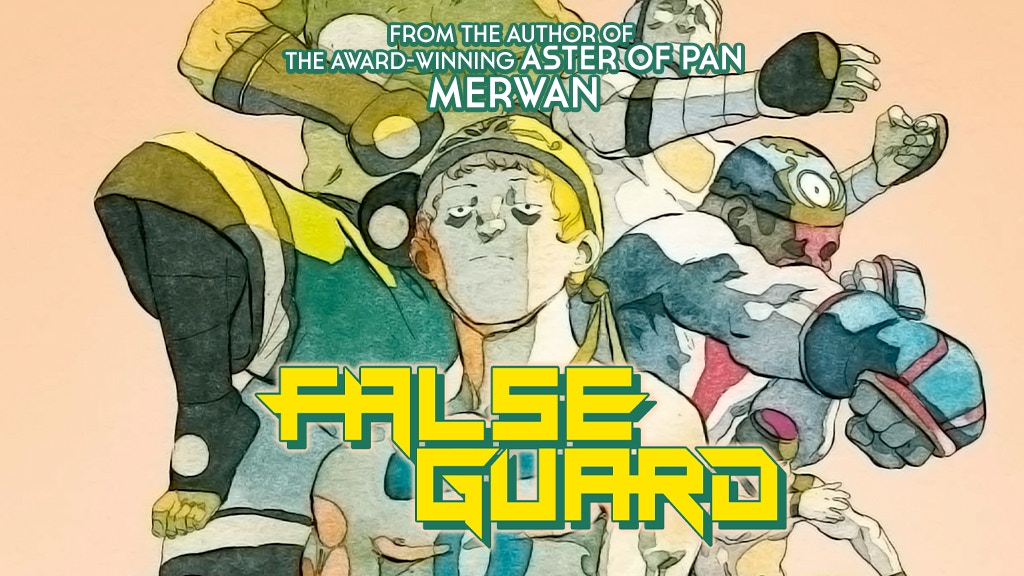 The complete graphic novel omnibus by the author of the award-winning ASTER OF PAN. (10 DAY FLASH CAMPAIGN!)

Latest Updates from Our Project:

We're happy to report that Spiral Galaxy has completed all EU/UK order shipments! That means that ALL FALSE GUARD SHIPPING IS NOW COMPLETE! The international portion took much longer than expected (for the many varied reasons recounted along the way), but we are confident that international order fulfillment will be much quicker moving forward, avoiding the numerous pitfalls that unfortunately besieged this particular project.

If you haven't received your pledge or at the very least tracking info, please message us and we'll look into it for you. Chances are you may have completed your survey late (or haven't completed it at all). We will begin a second wave of late-survey shipments in the weeks ahead.

In the meantime, we'd like to invite you to join us next Tuesday for (drumroll)...

Can't make it to San Diego Comic-Con next week? No problem! While we won't have a booth at that show this year, we are instead launching a VIRTUAL Convention Booth on Kickstarter! Not only will we be offering the premiere edition of the MAGNETIC-CON Comic Art Book filled with some amazing talent, but you'll also have a crack at one of only 500 VIP Loot Boxes filled with TWO new books and a huge haul of exclusive collectibles!

The first 1000 copies will include a FREE Magnetic-Con lanyard and PVC badge... just like attending a live convention!

Each of the 500 VIP Loot Boxes will include TWO new books selected around 5 different themes to choose from. A $125 value for only $60!

But the most exciting part for our supportive and regular Kickstarter followers is what awaits in Backerkit after the 10-day Kickstarter campaign is done...

OVER 120 BOOKS and COLLECTIBLE ITEMS will be available as Backerkit Add-ons for you to supplement your order, covering a wide range of product categories!

Missed out on some collectible stretch goal items from previous Kickstarter campaigns? We’ve collected the rare remainders so that you can have one more crack at them! Maximize your shipping by loading up on a list of books you've had your eye on!

Pre-register your pledge TODAY to get a two-sided mini-poster with artwork by Tony Sandoval and Chaiko added to your pledge for FREE!

We are really looking forward to launching this (non-)Con virtual convention booth experiment on Tuesday at 10am CST, and hope you'll join us! If it takes off, we'd love to make it an annual event (maybe even with actual convention stuff like online panels with creators, contests, and more)!

So please pre-register today and join us on Tuesday! We hope to see you there! 🤩

We hope this finds you well -- we're getting reports that orders to UK/EU backers are starting to be received... thank you for your patience! As the very last group to get theirs, it has been a long wait, fraught with a mindboggling sequence of unexpected and unusual challenges, but Spiral Galaxy has been rolling orders out the door in a steady stream for the past week or so, and we are told that stream will continue until the rest have been sent.  As of today's report via QML, they expect to wrap up next week, but please note that's just speculation until it is finished -- just as the past 6 weeks have hit them with a parade of challenges, we can only hope the next 7-10 days remain clear.

While 90+% of you have received your stuff, we did want to express our gratitude to those UK/EU backers still waiting. We posted some thoughts on the matter over on the SHANGRI-LA Kickstarter page (which we thought we'd share here too since FALSE GUARD shipped with that one, and some of you UK/EU backers here might fall into the same audience). TLDR: We understand and share your frustration over the unfortunate and unusual delay you wonderful few have endured, and understand any future choices this experience might influence, but we are committed to doing what is necessary to prevent such delays from happening again. 😊

If you are still waiting or have any questions about your pledge or anything else, please feel free to message us!

Hope you had a great weekend -- and hopefully those of you in the UK and EU have received address verification messages (and possibly even tracking info) from Spiral Galaxy for your shipment! We heard from a handful of backers who have gotten the former, and were told by QML last week that Sprial expected to have everything out by the weekend, but we haven't gotten confirmation yet... hopefully they have gotten things out the door, and hopefully we'll get confirmation of such asap! (That's a lot of hoping, but that's all we can do these days...)

We're really excited to not only get the last of this campaign's orders into the final backers' hands, and are even more excited to announce the next amazing campaign LAUNCHING TOMORROW:

Presenting a double-feature of cinematic thrillers illustrated by Eisner Award-nominee DIDIER CASSEGRAIN! Two out of this world graphic novel adaptations of two celebrated novels -- one a mind-bending murder mystery and the other a gonzo sci-fi action-adventure -- both brought to vivid life by the incomparable illustrative style of the amazing Didier Cassegrain!

BLACK WATER LILIES is a thrilling murder mystery with a brain-breaking twist based on the best-selling novel by Michel Bussi. Three women are tied to a murder in the quaint village of Giverney, where Monet painted his legendary Water LIlies, and the truth behind the killing goes much further than anyone can suspect...

TRAPPED ON ZARKASS is a wild interplanetary romp through the alien wilderness of a faraway planet, following two Earth agents as they deal with the indigenous alien population in search of answers to questions that each may be hiding from the other. Based on the classic 1957 sci-fi novel by Stefan Wul, this blockbuster ride is described as "APOCALYPSE NOW through the jungles of AVATAR'S PANDORA."

As usual, we have a pre-registration page open now where you can sign up to receive a FREE BONUS linen cardstock print by Didier Cassegrain with your pledge, and a SECOND BONUS print if you pledge on Day-1 (TOMORROW)! Please check it out and sign up -- we're hoping for another strong turnout tomorrow, and it's totally up to YOU to help us get there!

While these are admittedly two very different books -- one a taut and engrossing murder mystery, the other a wise-cracking and action-packed sci-fi adventure -- they both complement each other due to Didier's unique and stunningly original art style and talent.

Both books stand completely on their own,  and you can simply order one or the other, or get both at a bundled discount tier!

Of course, we have a lot of nifty stretch goals planned and we're also offering a handful of similar Add-ons to supplement your order, so please check out the campaign when it launches at 10am CST TOMORROW!

Thanks, everyone! Hope to see you there tomorrow!

We've finally received some word back from the Australia and UK shipping hubs as to the status of those orders. It has indeed taken a lot longer than anyone expected, so we're happy to report that solid progress is finally being made. For what it's worth, it seems that all fulfillment hubs in every region have been feeling the pressure of ongoing COVID-related staff shortages and their ripple effects, if not in their own warehouses then somewhere along the supply chain getting the goods to and from them. We're told that projects ahead of us were delayed for those global reasons, and those delays had an equal effect on following projects, including ours. They're trying to get caught up, but it is a bit of an uphill climb with so many Kickstarter campaigns to fulfill these days...

That said, here's what we learned from Quartermaster this morning:

We will add tracking numbers to your Backerkit orders once we have received them from QML/Aetherworks/Spiral, but frankly, you may receive those numbers (or even your items) directly from those hubs before we even get those numbers!

We really do appreciate your patience. We've all had to deal with unprecedented shipping challenges this year, but we're muscling through them...

I hope you are all doing well and starting a nice weekend. I must start by first apologizing to the international backers for the lack of news these past few weeks as orders seemed to crawl to their respective hubs in Australia and the UK. I've been hounding Quartermaster almost daily for the past month for updates, particularly these past two weeks when the freight was originally estimated to have arrived at their individual ports, but even QML has trouble getting updates through the ongoing shipping chaos. I've been reluctant to post a "no news" update, repeatedly hoping to have actual news a day or two later, but the lack of news from AU and the UK has been deafening...

...until now. We finally received word yesterday that the freight has finally reached Aetherworks in Australia, and the Spiral Galaxy shipment has apparently cleared customs in the UK. I only hope and pray that message wasn't an April Fool's Joke...! (I'm 99% sure it's not...)

Quartermaster will get more news from Spiral and Aetherworks after the weekend, but if those arrival reports are accurate, that should mean those international orders could hit the local mail within the next two weeks or so. We'll post more accurate info if/when we can get it from those hubs or QML.

Asia orders have already left the hub at VFI, so those are now in the hands of their regional postal carriers or game stores. We're told Japan and Singapore tend to move the fastest, so those orders should probably arrive in the next couple of weeks. Taiwan, Malaysia, Indonesia, and the Philippines might take a few weeks longer in the hands of their local post, as we're told there are more local checkpoints in those regions.

Thanks to all of you wonderful supporters abroad for your patience. We know it has been a long wait for your stuff, particularly with the domestic orders reaching backers' hands months ago. Nobody wants to be late for a party, but maybe we can look at this as the start of a SECOND party: The Overseas Edition as all of you finally receive your stuff! 😊 We look forward to hearing your squeals of satisfaction!

Please know that we are constantly working with QML and monitoring all of our international shipping options on a weekly basis. If there were anything we could do to speed up the process, we would, and we certainly will do whatever we can as we move forward with other campaign fulfillment. The global situation is stressful on all parts of the industry, from both directions (with incoming goods being further delayed from the factory to our own warehouse again lately).

Here's hoping and praying that things get better soon. Not just for the crass commercial benefit of lower gas prices and faster shipping, but for the health and well-being of so many people suffering unimaginable hardship these days. As much as we may become focused on the frustrations of having to wait for our books to arrive, that's nothing compared to the millions who are currently forced to leave their homes, families, and possessions behind. We encourage everyone who can give to please consider any one of these many verified charities. We are all one people, and we all benefit when we stand together in support of each other. Even when a particular crisis is half-a-world away, there are undoubtedly those in need right around every corner.

Thanks again, everyone! More news soon!